Wind energy refers to capturing the energy from moving air, i.e., wind, and converting it into electricity. Humans have been using wind energy for thousands of years. Historically, we have used it mainly for grinding grain and pumping water.

The term wind power means the same as wind energy.

National Geographic has the following definition of the term:

“Wind energy is produced by the movement of air (wind) and converted into power for human use.”

“Wind energy is produced with wind turbines – tall, tubular towers with blades rotating at the top. When the wind turns the blades, the blades turn a generator and create electricity.”

When the wind turns the blades of a traditional windmill, for example, it spins a turbine inside a small generator. The generator produces electricity.

Traditional farm windmills can only generate a small amount of electricity. Perhaps enough to power some of the farmer’s machines and also grind grains into flour. 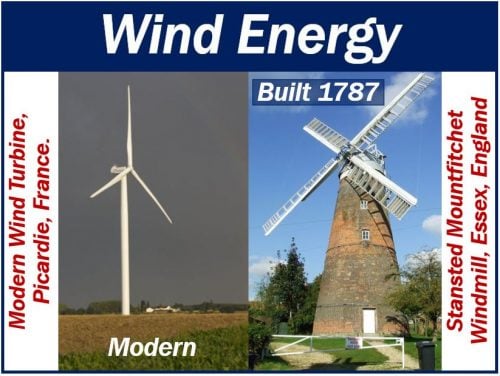 Wind turbines are devices that convert kinetic energy from the wind into electrical power, i.e., electricity. Kinetic energy is the energy that something has because it is moving. Kinetic means relating to or resulting from motion.

The turbine has blades, which turn in the wind at between thirteen and twenty revolutions per minute. Whether the blades revolve at a constant or variable speed depends on the turbine’s technology.

“Wind turbines have an average life of over 25 years, although the most widespread accounting criterion is set for periods of 20 years. Rapid evolution of wind technology has lead to an increase in the durability of wind turbines.” 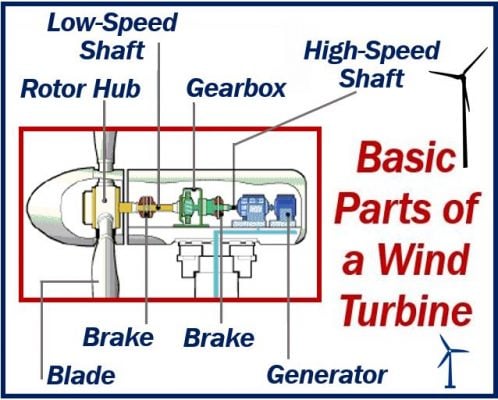 Below is an explanation of how a wind turbine generates electricity.

Wind turbines automatically turn so that they can face the wind. Then, they can take full advantage of the wind’s kinetic energy.

When the wind reaches 3.5 meters per second (m/s) the blades start turning. It is at maximum power when it reaches 11 m/s.

If the wind is blowing at 25 m/s, for example, the ‘feathered’ blades slow down. Thus, the turbine avoids excessive voltages.

The gearbox converts the slow rotation of the revolving blades into high-speed motion. It turns the shaft rapidly enough to power the generator.

The gearbox turns the revolutions-per-minute velocity from 13 to 1,500.

The generator is like a huge, scaled-up version of a bicycle dynamo. When we ride a bike, the dynamo spins when it touches the back wheel. By spinning, it generates enough electricity to light up the bicycle lamp.

A similar thing, but on a much larger scale, happens in a wind turbine. The gearbox transfers its energy to the generator, which produces electricity.

Acciona S.A. explains what happens after the generator has produced electricity:

“The energy generated runs through the inside of the tower to the base. From there, the energy runs over an underground line to the substation, where its voltage is raised in order to inject it into the electrical grid and distribute it to the points of consumption.” 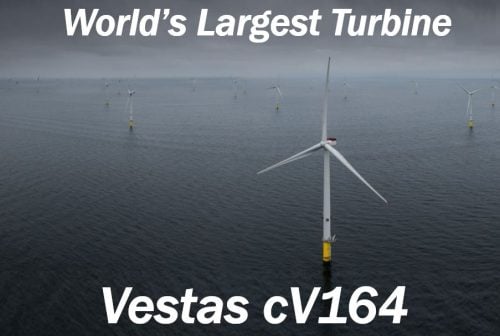 Turbines of all sizes

Domestic turbines are just a few meters tall. Industrial ones, i.e., turbines that power companies use, can be enormous.

Wind, sunlight, the sea, and rivers, for example, are always there. That is why we class solar energy, hydropower, and wind power as renewable energy.

Hydropower uses power from moving or falling water, which is always available. Tidal power is a type of hydropower.

Geothermal energy is also renewable energy. Its source is the Earth’s internal heat, which is always available.

Humans have been burning wood to cook their food and heat their homes for thousands of years. We call this type of energy biomass. Biomass is also renewable energy.

Investment in solar energy and wind power has increased significantly over the past thirty years.

If we built giant solar and wind farms in the Sahara, we would have more electricity than the world needs.