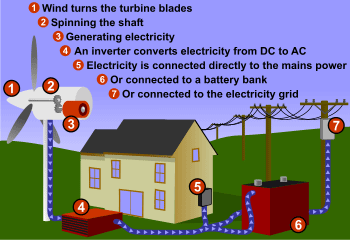 Wind is a clean and infinite energy source which is immune to the fluctuations and volatility of the fossil fuel industry.

Although our current system of using wind turbines is new, wind energy is not a new concept.

It doesn’t require any ongoing costs associated with raw resources or constant labour – just put the turbine in a windy spot and plug into the electrical power.

How does wind energy work – turbines

The most common wind electricity-generating method is using wind turbines. The wind turns large turbine blades, which spins a generator shaft and produces electricity (more about the parts of a wind turbine)

The electricity can then charge batteries, be connected to a building’s mains power, or connected to the national power grid.

Like solar, the European Union is leading the way with 48 percent of the world’s installed wind power capacity. In 2009, wind turbines installed in the EU produced 163 TWh of electricity – avoiding 106 million tonnes of carbon emissions [1].

Residential wind options include small wind turbines such as 500w rated turbine generators – enough to run lighting or a few appliances – to larger scale turbines such as a 2kw rated – enough to power an entire house plus sell some to the national grid depending on how much you use.

How does wind energy work? A wind turbine is connected to a house, battery bank, and/or the state electricity grid.

The most common model is the blade turbine, however a new style of turbine has recently emerged – vertical axis turbines.

Vertical axis turbines are smaller, lower to the ground, and create less noise – so are good for residential areas.

The praticalities of how wind energy works is simple, but socially and economically, not so simple.

The debates for and against wind power

The main hindrance to wind power’s proliferation is the capital costs. Wind turbines are large and cost a lot of money to construct. They also require a reasonable amount of land, which is another expense that makes this free energy not so free.

Interfering with the aesthetics of the land is another issue with wind turbines. The ideal location for a wind turbine is often rural and natural landscapes. Just as any issue of social policy, some people don’t mind seeing wind turbines out their front window, and some do.

Another issue with wind power is that wind is intermittent. It’s not windy all the time in every location, so wind power production doesn’t happen around the clock. The true power of wind energy is positioned as a contributing piece to the clean energy puzzle.

A secondary cost consideration is savings on carbon taxes and Emissions Trading Schemes – which are set at a per kg amount. A report on the New Zealand wind energy economy states that increasing wind energy installations to supply 20% of the country’s electricity needs will mean nationwide savings of $390 per person per year – based on production and carbon-tax reductions. [2]

An interesting discussion is the cost of developing clean energy technologies – and the lack of commercial viability compared to conventional energy such as coal or nuclear. An interesting fact to note is that early nuclear development was subsidised by approximately $19/ kilowatt hour. Early wind technology worldwide was subsidised at approximately $0.57 / kilowatt hour.

Unlike conventional energy production, wind is infinite and it doesn’t produce any toxic by-products such as carbon or ethane.

It also doesn’t require any ongoing raw resources, which are expensive in terms of energy used for extraction, pollution from extraction and transportation, as well as financial costs of equipment and ongoing labour hours.

How Does Wind Energy Work – How much electricity can a turbine produce?

Electricity output depends on a number of variables including location (how much wind there is), turbine size and style, and rotar diameter.

Because of the intermittent nature of wind, general guidelines are that wind turbines will output between 10-40% of their rated capacity [3].

A realistic estimate of how much electricity a wind turbine would produce can be calculated using the average wind speed and hours for your location and turbine model specifications.You can calculate this yourself, or a local dealer will have all the measurements.

In summing up, wind is a low cost, low maintenance energy production method. Wind energy works by harnessing natural wind movements, capturing it as kinetic energy through turbine blades, then converting the kinetic energy into electricity through an electro magnetic generator at the top of the turbine.