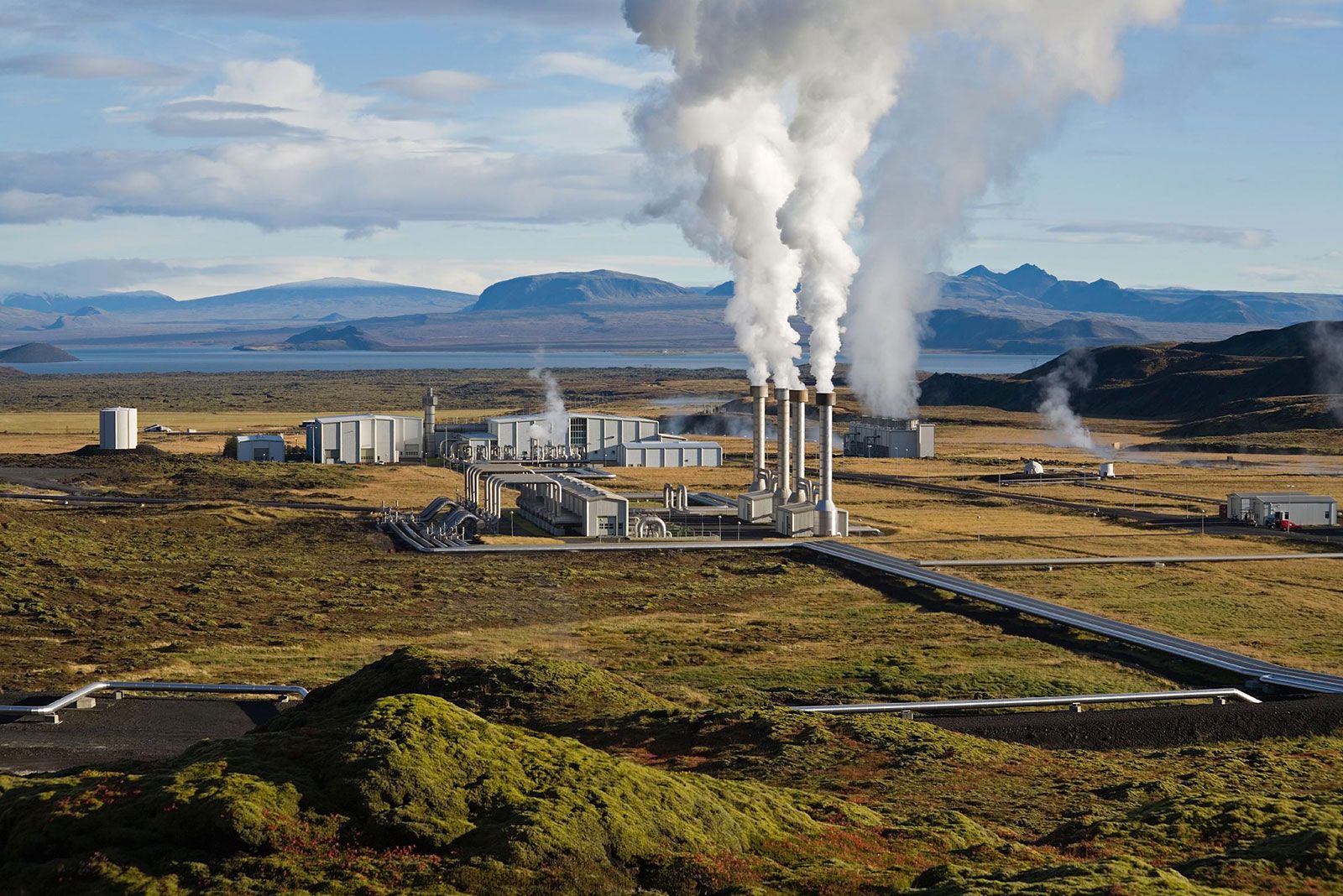 Geothermal energy, form of energy conversion in which heat energy from within Earth is captured and harnessed for cooking, bathing, space heating, electrical power generation, and other uses.

Human action has triggered a vast cascade of environmental problems that now threaten the continued ability of both natural and human systems to flourish. Solving the critical environmental problems of global warming, water scarcity, pollution, and biodiversity loss are perhaps the greatest challenges of the 21st century. Will we rise to meet them?

Heat from Earth’s interior generates surface phenomena such as lava flows, geysers, fumaroles, hot springs, and mud pots. The heat is produced mainly by the radioactive decay of potassium, thorium, and uranium in Earth’s crust and mantle and also by friction generated along the margins of continental plates. The subsequent annual low-grade heat flow to the surface averages between 50 and 70 milliwatts (mW) per square metre worldwide. In contrast, incoming solar radiation striking Earth’s surface provides 342 watts per square metre annually (see solar energy). Geothermal heat energy can be recovered and exploited for human use, and it is available anywhere on Earth’s surface. The estimated energy that can be recovered and utilized on the surface is 4.5 × 106 exajoules, or about 1.4 × 106 terawatt-years, which equates to roughly three times the world’s annual consumption of all types of energy.

The amount of usable energy from geothermal sources varies with depth and by extraction method. The increase in temperature of rocks and other materials underground averages 20–30 °C (36–54 °F) per kilometre (0.6 mile) depth worldwide in the upper part of the lithosphere, and this rate of increase is much higher in most of Earth’s known geothermal areas. Normally, heat extraction requires a fluid (or steam) to bring the energy to the surface. Locating and developing geothermal resources can be challenging. This is especially true for the high-temperature resources needed for generating electricity. Such resources are typically limited to parts of the world characterized by recent volcanic activity or located along plate boundaries or within crustal hot spots. Even though there is a continuous source of heat within Earth, the extraction rate of the heated fluids and steam can exceed the replenishment rate, and, thus, use of the resource must be managed sustainably.

Probably the most widely used set of applications involves the direct use of heated water from the ground without the need for any specialized equipment. All direct-use applications make use of low-temperature geothermal resources, which range between about 50 and 150 °C (122 and 302 °F). Such low-temperature geothermal water and steam have been used to warm single buildings, as well as whole districts where numerous buildings are heated from a central supply source. In addition, many swimming pools, balneological (therapeutic) facilities at spas, greenhouses, and aquaculture ponds around the world have been heated with geothermal resources. Other direct uses of geothermal energy include cooking, industrial applications (such as drying fruit, vegetables, and timber), milk pasteurization, and large-scale snow melting. For many of those activities, hot water is often used directly in the heating system, or it may be used in conjunction with a heat exchanger, which transfers heat when there are problematic minerals and gases such as hydrogen sulfide mixed in with the fluid.

Geothermal heat pumps (GHPs) take advantage of the relatively stable moderate temperature conditions that occur within the first 300 metres (1,000 feet) of the surface to heat buildings in the winter and cool them in the summer. In that part of the lithosphere, rocks and groundwater occur at temperatures between 5 and 30 °C (41 and 86 °F). At shallower depths, where most GHPs are found, such as within 6 metres (about 20 feet) of Earth’s surface, the temperature of the ground maintains a near-constant temperature of 10 to 16 °C (50 to 60 °F). Consequently, that heat can be used to help warm buildings during the colder months of the year when the air temperature falls below that of the ground. Similarly, during the warmer months of the year, warm air can be drawn from a building and circulated underground, where it loses much of its heat and is returned.

A GHP system is made up of a heat exchanger (a loop of pipes buried in the ground) and a pump. The heat exchanger transfers heat energy between the ground and air at the surface by means of a fluid that circulates through the pipes; the fluid used is often water or a combination of water and antifreeze. During warmer months, heat from warm air is transferred to the heat exchanger and into the fluid. As it moves through the pipes, the heat is dispersed to the rocks, soil, and groundwater. The pump is reversed during the colder months. Heat energy stored in the relatively warm ground raises the temperature of the fluid. The fluid then transfers this energy to the heat pump, which warms the air inside the building.

GHPs have several advantages over more conventional heating and air-conditioning systems. They are very efficient, using 25–50 percent less electricity than comparable conventional heating and cooling systems, and they produce less pollution. The reduction in energy use associated with GHPs can translate into as much as a 44 percent decrease in greenhouse gas emissions compared with air-source heat pumps (which transfer heat between indoor and outdoor air). In addition, when compared with electric resistance heating systems (which convert electricity to heat) coupled with standard air-conditioning systems, GHPs can produce up to 72 percent less greenhouse gas emissions.

Depending upon the temperature and the fluid (steam) flow, geothermal energy can be used to generate electricity. Geothermal power plants can produce electricity in three ways. Despite their differences in design, all three control the behaviour of steam and use it to drive electrical generators. Given that the excess water vapour at the end of each process is condensed and returned to the ground, where it is reheated for later use, geothermal power is considered a form of renewable energy.

Some geothermal power plants simply collect rising steam from the ground. In such “dry steam” operations, the heated water vapour is funneled directly into a turbine that drives an electrical generator. Other power plants, built around the flash steam and binary cycle designs, use a mixture of steam and heated water (“wet steam”) extracted from the ground to start the electrical generation process.

In flash steam power plants, pressurized high-temperature water is drawn from beneath the surface into containers at the surface, called flash tanks, where the sudden decrease in pressure causes the liquid water to “flash,” or vaporize, into steam. The steam is then used to power the turbine-generator set. In contrast, binary-cycle power plants use steam driven off a secondary working fluid (such as ammonia and hydrocarbons) contained within a closed loop of pipes to power the turbine-generator set. In this process, geothermally heated water is drawn up through a different set of pipes, and much of the energy stored in the heated water is transferred to the working fluid through a heat exchanger. The working fluid then vaporizes. After the vapour from the working fluid passes through the turbine, it is recondensed and piped back to the heat exchanger.

Electrical power usually requires water heated above 175 °C (347 °F) to be economical. In geothermal plants using the Organic Rankine Cycle (ORC), a special type of binary-cycle technology that utilizes lower-temperature heat sources (such as biomass combustion and industrial waste heat), water temperatures as low as 85–90 °C (185–194 °F) may be used.

Stay Up To Date

Subscribe to our newsletter and stay informed about the Latest Advances in Alternative Energy Technology.